Varanasi, older than history is a spiritual hub of India. The city is older than our imagination and devotees from all over the world are attracted to this ancient city. The city isn’t just a spiritual destination but is also a great place to know the history and creation of the universe. The city is also known as Banaras or Kashi, the cultural capital of India, and the place to begin learning in the past. According to the legends of Kashi, Lord Shiva himself created the city and now is known as ‘home of Lord Shiva’. In your Kashi yatra from Chennai, you can immerse yourself in the city and have real-life experiences in the belief of the Hindu religion.

The holy city is so interlaced with heavenly nature that folks trust that to die in Varanasi is to achieve salvation. Many visit the city to spend the end days of their life. Varanasi has many places to visit that include temples, ghats, markets, and much more. It is filled with fun things to do, food to eat, festivals to celebrate, and experiences you will cherish a lifetime. Varanasi tour packages from Trip Kashi provide you a complete guide to make your Kashi yatra memorable. Here is the list of everything you need to know about Varanasi. Let’s begin Varanasi city tour- Places to visit in Varanasi

Kashi Vishwanath Temple- Kashi Vishwanath temple is on the top in the list of places to visit in Varanasi. The temple is located on the western bank river Ganga and is considered amongst the most popular temple dedicated to Shiva. The temple was built by Queen Ahilya Devi in the year 1780 and today is the core of faith for Hindus. The temple has two domes covered in gold which is donated by Maharaja Ranjit Singh. The jyotirlinga in the temple is
one of the 12 Jyotirlingas in the country.

Dashashwamedh Ghat- It is believed to be a place where Lord Brahma performed the sacrifice of ten horses. As per the Hindu mythology, the ghat was created by Lord Brahma to welcome Lord Shiva. It is the main ghat in Varanasi and a must-visit place to visit in Varanasi in 2 days. The ghat is located close to the famous Kashi Vishwanath Temple and is the liveliest and holiest ghat here. The famous Ganga Aarti also happened to be here and many major festivals are celebrated on this ghat.

Tibetan Temple- Tibetan temple is a place where Lord Buddha taught the four truths of life to his disciples. The temple is made in Tibetan architecture. The temple complex has a magnificent sculpture of Shakyamuni and a prayer wheel which is adorned with beautiful Buddhist paintings called Thangka. The prayer wheel is the main attraction of the temple that releases paper with a prayer written on it.

Assi Ghat- Assi Ghat is another ghat to be visited in Kashi yatra from Chennai. This lively ghat is the heart of Varanasi which is famous amongst locals as well as travelers. The ghat is located in the south Varanasi near Banaras Hindu University. It is a place where the holy river Ganga meets the river Assi. People who come to pay homage to Lord Shiva take a holy dip in the river. The religious importance of the ghat is mentioned in various Puranas.

Girjaghar (St. Thomas Church)- Located in the heart of Varanasi, Old St. Thomas Church in Godowlia is another tourist place in Varanasi local tour package that draws many visitors towards it. Saint Thomas who was an alone messenger who went past the Roman Empire to lecture the Gospels and one of 12 Jesus’ messengers visited the city about 52 AD to 72 AD. It was built by East India Company to honor Saint Thomas.

Things To Do in Varanasi

Boat ride in the holy river Ganga is one of the must things to do in the Varanasi trip package.
It is of those few experiences which you will cherish a lifetime. Rowing boats take one through different ghats situated close to the river offering the best panoramic views of the river. The best time to enjoy a boat ride is during the dawn. It is the time when the clamor and color of the city will stun you.
Watching world famous Ganga Aarti in Varanasi is once in life experience and something which no one should miss on Kashi yatra from Chennai.

This spectacular event takes place on the bank of river Ganga and must be viewed Dashashwamedha ghat. Visit at least one hour before the aarti and see rituals unfolding in front of your eyes. Brass lamps of about 4.5 kgs are used for aarti along with incense sticks, flowers, and chants. The evening aarti takes place at 6:45 PM every day.

When taking Varanasi city tour, do not miss another most happening thing to do in Varanasi that is walking along the ghats. With almost a hundred ghats, Varanasi has gained popularity as the city of ghats. Each of the ghats here has some mythologies or legends which make them special, alluring for travelers. Assi ghat, Dashashwamedh ghat, Manikarnika ghat, Scindia ghat, Raj ghat, and Mushi ghat are some of the major places to visit in Varanasi in 2 days.

Shopping from the local market of Varanasi shouldn’t be missed on the Varanasi trip. Make sure to take out one evening to stroll through the market and grab all your favorites. Varanasi is renowned for its silk sarees across the world. You can find out various designs and patterns. Apart from sarees, shawls, stone inlay work, bangles, rudraksha, and there are many local souvenirs you can take from here. Varanasi is the city that is known for its ghats and temples and Kashi yatra from Chennai would be incomplete without visiting the best temples of the holy city. You can find one temple on almost every ghat, road, and road crossing. The small ones here are used for daily worship, and the large temples are the ones linked with legends and Hind mythologies. The most popular temple here is Kashi Vishwanath Temple which was built by Rani Ahilya Bai in 1780 and is also known as Golden temple. The second must-visit temple is Durga Temple.

Varanasi is well known for its version of foods. While you’re strolling the ghats and markets of Varanasi, you can satiate your taste buds with the delectable street food of Varanasi. From English breakfast to zesty Kachori to jalebis to plain South Indian treats, you will find
out plenty of options to binge on. Channa Dahi Bada, kachori sabzi, Tamatar chat, Safed Makhan toast, Laiyya chana, Thandai, Launglata, Baati Chokha are few of the famous street food of Varanasi which shouldn’t be missed at any cost in Kashi yatra from Chennai.

How to reach Varanasi 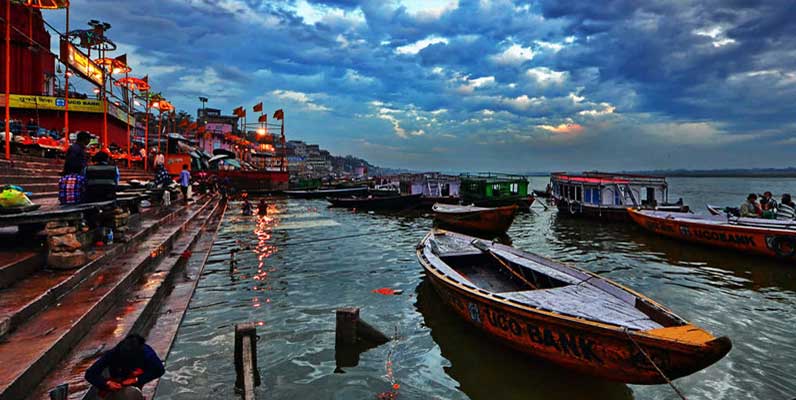 Varanasi can be visited throughout the year. But, the best time to visit Varanasi is from October to February when the winter season is on. It is best to plan your Kashi yatra from Chennai during these months as you can explore the city without getting tired. From April to September is a summer season there, which is an off-season to visit Kashi. Varanasi city tour can be done at this time also just don’t forget to carry sunscreen with you.